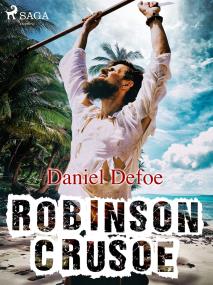 by Daniel Defoe
"Robinson Crusoe" is Daniel Defoe’s best and most popular novel. It is structured like an autobiography of the main character, depicting his castaway adventures on a lonely island for 28 years. Defoe’s novel abounds in detailed natural descriptions, moments of calm before the stormy action, and powerful character development. It is the story of quite an ordinary man who struggles to survive in extraordinary circumstances through the help of God, his will to live, and the power of friendship. The action part is recommendable – cannibals, more castaways, and a recaptured English ship. Perhaps the first English novel, "Robinson Crusoe" is a text that should be approached by readers of all ages and walks of life.

Daniel Defoe (c. 1660 – 1731) was an English novelist, journalist, and trader, most famous for his novel "Robinson Crusoe". He was often labelled the founder of the English novel. A prolific writer of more than five hundred books on various topics, Daniel Defoe was one of the most important names in literary circles at the time. His other works worth mentioning are "Moll Flanders", "A Journal of the Plague Year", and "Captain Singleton".

Log in to borrow this title and view current loan status.
Read more here How to borrow